HI!
Welcome to my space

This is Farhad Foroutanian (Rad)
Love in its widest sense inspires my art.
My artworks are instruments for me to radiate my visions and my truth with you.

Each one of us has a mission, mine is Observe, Visualize and Transmit, which I do it with extreme pleasure and authenticity.

After I concluded my education in Theatre and Visual arts I started my carrier as cartoonist, Illustrator and in same time also as theater maker.
In 1986 I immigrated from Iran to The Netherlands , since then I work for many different Dutch and other European publishers, such as
Rotterdams Dagblad, Vrij Nederland, Vice versa, Algemene Dagblad, IDFA and IRFF festivals, Stern magazine(Gr), Nebespalter (Sw), la Voce (It) and many more valuable publications.
My visual artworks have been displayed in about 80 solo and group exhibitions around the glob.

My works has been honored several times such as: 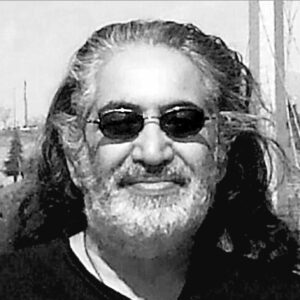